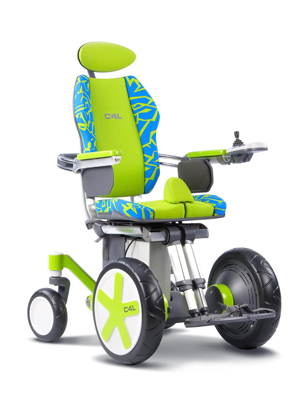 IDA honorary juries examined over 1000 entries submitted by architects and designers of interiors, fashion, products, and graphics from 52 countries throughout the world. After final decisions had been made, the jury rewarded the best professional and emerging designers for their achievements in terms of design, creativity, usability and innovation. Judging was a rigorous process, with winners receiving publication of their work in the International Design Awards Book of Designs. The coveted IDA Trophy will be awarded to all Designer of the Year title winners at the official biennial International Design Awards Ceremony in Los Angeles.

PROJECT DESCRIPTION
The NHS National Innovation Centre (NIC) launched a competition to build on research to develop the next phase for a pediatric powered wheelchair which could meet the needs of a wider user base. Renfrew Group won the tender to develop the “Chair4Life” initiative, and have worked closely with users, carers and key stakeholders to refine the specification. The collaborative work has now been completed and the result is a modular wheelchair that can accommodate children aged 4-18 years plus, with a range of features that allow for unprecedented levels of user customization. The chair really can grow with the child and allows for important ‘eye to eye’ contact for all ages and their peers. A fully working prototype has been unveiled at the NHS Expo in March 2013, and is currently under further evaluation by NHS commissioners and the Department of Health to facilitate the next stage. The C4L could change so many lives for the better.