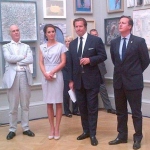 The summit, formed as part of the GREAT initiative organized by the Uk Trade & Investment during the Olympic and Paralympic Games to boost British Industry, was a unique forum to highlight and promote the expertise and experience of the UK creative services industry and to enhance its image in high growth markets and international businesses.

The UK has the largest creative industries sector in Europe, which directly and indirectly employs 1.5 million people and generates exports worth £8.9 billion a year

Following the success of the day’s events, Culture Secretary Jeremy Hunt hosted an evening reception at the Royal Academy of Arts, attended by HRH the Duchess of Cambridge.
Jeremy Hunt said:

“The creative industries are an integral part of the UK’s economic success and future growth. We have one of the most innovative and successful advertising industries in the world as well as a strong and vibrant media sector.”

Joining them were some 800 people, including representatives of the UK’s leading creative companies, industry figureheads, as well as guests from overseas businesses and organisations interested in investing in or buying creative services from the UK.

It was an unmissable opportunity for both UK and International delegates to engage with key decision makers and influencers at the highest level.