The exhibition showcases how DMU is working towards a vision of being a truly global university in the 21st century.  Demonstrating examples of work from a scholarly community that delivers world-leading social and economic impact, the display features the revolutionary Artificial Pancreas

Renfrew Group International has worked with DMU for several years and have been instrumental in developing the device and its associated hardware systems. 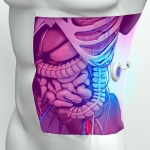 The Artificial Pancreas (See image) is a device which when implanted into the peritoneal cavity will automatically release the correct amount of insulin in response to varying blood sugar levels. The ‘artificial pancreas’ is currently undergoing pre-clinical trials.

This is an exciting opportunity to showcase the Artificial Pancreas at the CBI, which is the UK’s premier business lobbying organisation, providing a voice for employers at a national and international level and representing companies of every size.