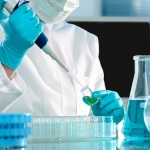 North West Fund-backed company ProKyma which is developing a groundbreaking cancer test, has been named the Merseyside Innovation Awards winner for May.

The company is working with the University of Liverpool and Renfrew Group International to develop a personalised blood test to measure the level of cancer cells in a patient’s blood.
The project is still in the research phase but if successful it would enable doctors to determine in real time whether a course of treatment is working and whether a cancer has been completely eradicated from the body. It may also allow the development of more mild cancer treatments.

Once the research and testing phase is complete, ProKyma plans to offer the test to pharmaceutical companies to use as part of their screening process for cancer drug candidates and build a manufacturing base in Merseyside.

ProKyma has been backed by the National Institute for Health Research with £500,000 in funding and also secured further investment from the North West Fund for Biochemical in 2013 to move to Liverpool Science Park.
The business is led by chief executive Damian Bond and chairman Chris Stanley.

Bond said: “A lot of the research which is trying to detect cancer cells in the blood at the moment is working to try to find a way to make cancer cells stick to probes in order to identify them in blood.
“But the cells are very hard to detect and are often masked by millions of white blood cells, so it is really a case of finding a needle in a haystack. We have approached the problem from a different angle.

“By using antibodies to make the white blood cells stick to the probe, we can effectively remove the haystack by removing the plentiful white blood cells. By doing this, we know that the cells left behind are cancer cells.
“Around 50 per cent of people with cancer today will die within five years. But most of the time the primary tumour is not what kills a patient, it is the secondary tumour that implants elsewhere in the body as a result of these cancerous cells in the blood.

“Our aim is to use our technology to allow doctors to identify whether a cancer has returned before any visible indicators or symptoms present themselves in order to prevent deadly secondary cancers implanting.”