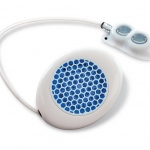 The Summit was hosted by Lord Green of Hurstpierpoint, Minister of State for Trade and Investment and Professor Lord Darzi of Denham, UK Business Ambassador for the Life Sciences and Chair of the Institute of Global Health Innovation at Imperial College London.  They were joined by an impressive cadre of speakers of influential Health leaders from around the world.

The idea of partnering leading practitioners of design and academia in collaborative projects has resulted in the revolutionary Artificial Pancreas,  a device that does not rely on electronic controls to regulate glucose levels in the body, but instead uses a novel polymeric gel to automatically control the delivery of insulin into the peritoneum.

The Artificial Pancreas is an implantable device which could herald the end of multiple insulin injections for sufferers of Type 1 diabetes – a large proportion of which are at risk of over or under medicating with current treatment methods.

“We have reached a critical point in the development of a device which could ultimately immeasurably improve lives,” said Professor Taylor.

With the right funding to continue the successful completion of this device’s study and to undertake pre-clinical trials tests, would mean a significant step forward in the development of an advanced first-generation artificial pancreas.

The Life Science event  proved  an outstanding opportunity for RGi and DMU to meet and discuss the future development of this project  and  highlighted  how a collaboration between industry and academia can produce world class answers with some of the world’s most  influential sector leaders such as Sir David Nicholson, Head of the NHS and  Minister for Life Sciences , Science Minister David Willetts and Minister of Health, Andrew Langsley.

Bruce said: “We [RGi] are really proud to be working on such a high profile project that could meaningfully aid and improve the lives of Type 1 diabetes sufferers”.

Renfrew Group International has for over 25 years, converted innovation into successful products. Projects have ranged from healthcare equipment, through consumer products, to capital goods of all types.